I wrote a travel column recently that mentioned my Aunt Marilyn and a trip we took together in September 2018. When I posted it on my Facebook page, someone commented that they couldn't wait to read more about Aunt Marilyn and our travels.

I remembered that I had written a series of columns last year about the trip that for some reason never ran - probably because they were so long. Anyway, I figured they should be shared somewhere, so here's part 1 of our trip together with more to follow.

Around this time last year I got a letter from my dear aunt, Marilyn Sanchez, who lives near the Twin Cities in Minnesota. She doesn’t do email. She doesn’t even own a computer. And well, it just seems hard to time it right for phone calls, so we correspond the old-fashioned way - with notecards and stationery and stamps from the U.S. Postal Service.

Aunt Marilyn is 88 - she’ll be turning 89 this spring. In her letter, she asked if I might be interested in taking a trip with her to meet some relatives I have never met before - cousins and second and third cousins. She wanted me to see the small town in Eastern Kentucky where my her father was born. I loved the idea.

When I was growing up, our family wasn’t one that took vacations in station wagons across the country. The trips we took were pretty limited - we’d make a 3-hour trip to central Illinois for a family reunion. Or from the Chicago suburbs to Northwest Indiana to a bed and breakfast my mom loved. Or to a lakeside rental cabin on Cedar Lake. Besides those brief trips close to home, I didn’t leave the state until the summer I was 12-going-on-13. My older sister’s wedding was in July of 1985 and my Aunt Marilyn and Uncle John attended the wedding and suggested taking me and my twin sisters back with them on a trip. That would be our first taste of travel - and I credit them with passing on the travel bug that led me in that wanderlust direction and resulted in me becoming a travel writer.

Aunt Marilyn is my dad’s older sister. He’s the youngest of four. His oldest sister, Ramona, also offered to bring us to their Missouri farm for part of the trip. So, we spent two weeks with my Aunt Ramona and Uncle Roland on their farm not far from St. Louis. From there, Uncle John picked us up, drove us through Iowa and back to his home in Minneapolis where we spent a week.

We had a blast. We spent time in their community, went to the ValleyFair amusement park (where we thought Aunt Marilyn was the coolest aunt ever for riding roller coasters with us) and then they took us up to Canada. It was back in the days when you didn’t need a passport to cross the border and they took us into Thunder Bay where we saw Lake Superior and spent the night. Both Marilyn and John were educators and they knew the value of travel and exposing children to new surroundings and I’m so thankful for them and that trip through three new states and a new country.

That was the last time I had traveled with Aunt Marilyn. She and Uncle John have traveled all over the world and my other sisters have taken trips with her — including one through Europe. I was very excited to be planning this trip and to travel with her and to be introduced to family members. I’ve always been interested in family history and she knows that. I wrote her back and told her I’d love to do a trip with her.

Later I got a reply from her with a little more info on where we were going and who I’d be meeting. The trip would take us through four states and I’d be meeting five cousins I had never heard of. It was scheduled for early September. I was a little nervous about it. It would be the start of the school year and cross country season I wasn’t sure what I’d be missing with the kids. It would mean hubby would have to pick up the slack ofeeding everyone and chauffeuring everyone around.

Other than a handful of overnighters, I’d never really traveled without the kids. Our trip would end up being 10 days. It was the longest I’d ever been away from my husband and kids. And really there have only been two trips I’ve ever taken that have been that have been more than a week - one across the state of Tennessee from Memphis to the Smoky Mountains in 1997 and one in 2006 to South Carolina and Tennessee. This would definitely be new, but I was really excited about this adventure.

We set off on Labor Day weekend. Our destination was Dayton, Ohio where we’d join a Labor Day barbecue with Marilyn’s cousin, Carol, and her family. Marilyn arrived at my house the day before our departure for Ohio and showed us old family photos and refreshed my memory on the relatives I had met and heard about who was pictured. I learned that Marilyn’s father and Carol’s mother were siblings. 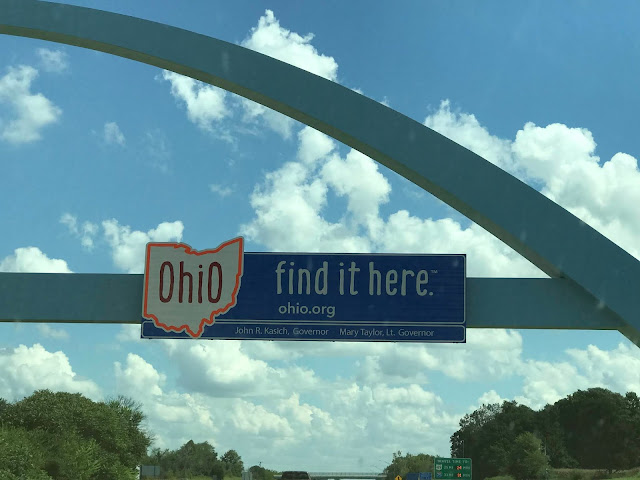 We arrived right on time to Carol’s for a 2 p.m. barbecue. There we met her daughter and two sons and a niece and nephew. After a little visiting and some dinner, we set off for our hotel with plans to meet for dinner the next day.

Since our day was open until the evening, Marilyn suggested we find some local sites to check out. We first went to the Wright-Dunbar Interpretive Center. I really didn’t know anything about Dayton before our visit and was surprised at the amount of aviation history and attractions that exist there. We visited the Wright Cycle Company which was run by brothers Orville and Wilbur Wright in this original building that is a designated National Historic Landmark. We then toured the Wright-Dunbar Interpretive Center, which is part of the National Parks Service. We watched an interesting movie about the brothers and walked through the exhibits. 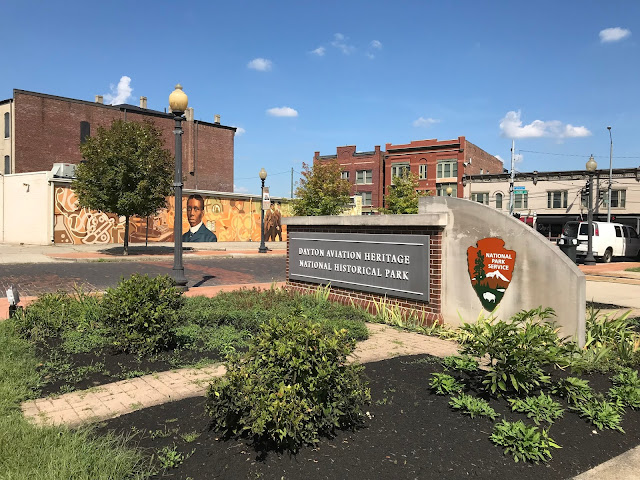 When I noticed that the National Museum of the U.S. Air Force was there, I asked Marilyn if we could stop there as well. I had no idea how massive the museum would be. It is the world’s largest and oldest military aviation museum and Ohio’s most visited free attraction. We only had a short window to visit, so we picked out a couple things we wanted to see and tried to move through quickly, but you could easily spend a full afternoon there. My favorite part was the exhibit of presidential planes. I even walked through JFK’s presidential plane and there were others that could also be boarded. It was very impressive and a spot I’d definitely recommend if you are visiting southeast Ohio.

That evening we had dinner with Carol and her kids to celebrate her 84th birthday. We drove a bit to Centerville to a restaurant called Sweeney’s. She requested seafood and according to her son’s, Sweeney’s was the place to go. We enjoyed a good meal and then returned to our hotel for a night of rest before an early morning departure for Kentucky.