City of Chicago to hold Victory Parade and Rally on Friday

For the first time in 108 years, the Chicago Cubs are the World Series Champions and the city is preparing for an epic party to be held less than 36 hours after the Cubs beat the Cleveland Indians in a  10-inning, game 7 battle at Progressive Field.

The team buses are scheduled to leave Wrigley Field around 10 a.m. on Friday for a downtown parade and noon rally at Lower Hutchinson Field in Grant Park. The parade is expected to travel from Addison and Sheffield to Pine Grove and likely downtown via Lake Shore drive. The parade downtown is expected to begin at Michigan Avenue at Oak, then south to Ohio Street before moving to Grant Park for the rally. The event is open to the public.
at November 03, 2016 No comments: 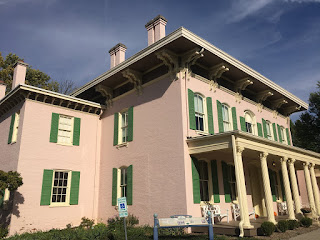 For those who love history, Springfield, Illinois should be at the top of your Midwest travel list. Besides the very obvious reasons of there being a current and former state capitol as well as so many attractions related to Abraham Lincoln, there are several historic homes in the city that give a glimpse into life in Springfield's early days.

On a recent visit to Springfield, I was able to visit some of those historic homes, including Edwards Place, which is the oldest home in the city that has remained in the same location. Built in 1833, the home was occupied by Benjamin and Helen Edwards and was a social hub of the area. Benjamin Edwards was the youngest son of Governor Ninian Edwards. The Edwards hosted parties and political events, including a rally for Stephen A. Douglas, which wouldn't seem all that unusual for a prominent family in early Springfield. However, the sister of Edwards' brothers' wife happened to be Mary Todd Lincoln. 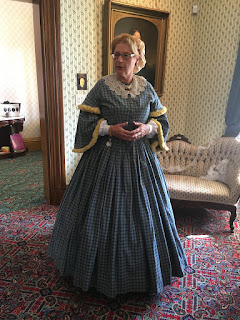 Within the home are priceless pieces with ties to Lincoln, including the "courting couch" where Abe Lincoln and Mary Todd sat during their courtship in the home of Benjamin Edward's brother and the square grand piano that was used to play music at the wedding of the Lincolns.

The home underwent renovations to expand it in 1857 and cutouts on several walls show where the original brick is underneath. The renovations included the addition of the front porch that you see on the home today. In some spots, the original wallpaper is visible and you're able to view it in comparison to amazingly identical reproductions.

Throughout the home, the formality and prestige is conveyed, with some original furnishings displayed along with other period pieces in the parlor and private living spaces. As we visited, the house was being prepared for a fun murder mystery dinner (a first time event)
so it didn't appear exactly as it would a normal tour, but we were able to get a good look at what is covered on a routine tour, which lasts about 45-minutes. 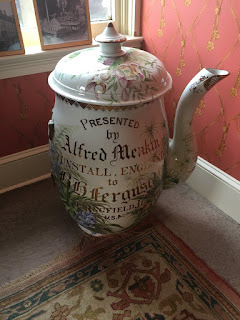 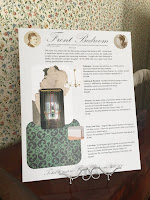 The home ceased being occupied by the Edwards' family following the death of their daughter in 1909. It later became home to the Springfield Art Association in 1913 and became a gallery and space for meeting and education.

In 2015, the first floor was restored to appear as it would have when the Edwards called the structure their home with plans to continue with restoration of the second floor in the near future.

The home is open for public tours on Tuesday through Friday at 1, 2 and 3 p.m. and on Saturday at 12, 1 and 2 p.m. or by social appointment. Admission is $5 for adults and kids age 10 and under are free. For more information, visit EdwardsPlace.org